6 days of tour of the imperial cities of Morocco from Tangier. The trip takes you via the top destinations of Morocco. From Tangier to the blue-painted streets of Chefchaouen, and passing through the Roman ruins of Volubilis and going via the historic medina of Fes. And then we’ll Travel to the capital of Morocco, Rabat, before arriving in the modern city of Casablanca and ending our tour in the red city of Marrakech.

Please keep in mind that every route on our website is only a starting point. We will adjust everything and everything to match your schedule, budget and expectations. You can extend it, change or shorten it.

We will meet and greet in Tangier and then head to Chefchaouen, a town built as a hidden place to attack the Portuguese on the north coast. It was absolutely forbidden for Europeans to enter the village until the arrival of the Spanish troops in 1920. The Arrival in Chefchaouen and then you will be able to create your first connection with the city. Overnight in Chefchouen with HB.  Riad Lina and the Spa.

Departure towards the Roman city of voluibilis, 166 km away, and it takes 2 hours to get there. Volubilis is at the foot of the Jebel Zerhoun. The site was inhabited during the Meolithic period and was occupied by the Carthaginians and then by the Romans. In this heritage site, you will explore the house of Orpheus, Decumanus Maximus and Triumphal Arch, the house of Dinysus, the house of Dionysus and the Four Seasion, and after visiting the Roman city, you will travel to Meknes and around 4:00 p.m. you will move to Fes. Overnight in the ancient medina of Fes. HB Riad Dar D’OR.

After breakfast, with a local official tour guide, we will commence our visit to “the world’s oldest living Medina.” We will explore the Medina with its souks, stop at the door of the Royal Palace, the 9th century Karouine Mosque and the University. We will also see the tomb of the city founder “Moulay Idriss II.” Lunch will take place at one of the old Medina’s traditional restaurants. We will continue our tour after lunch to visit the Nejjarine Fountain, the ancient Harem Garden and the Batha Museum. We’ll stop genuinely to love a scenic view of the city on the way back to the hotel. Riad Dar D’OR

We will leave Fes and head north to the imperial city (and today’s capital) of Rabat. And then we’ll Visit the medieval fortifications of the Chellah Necropolis and discover the Roman and Islamic ruins. In addition to that, we will visit the old town center of Rabat by entering through the grand door of the Kasbah des Oudaias. From there, we will explore the Andalusian Gardens of the 20th century and enjoying the peaceful space away from the crowds. Then, we’ll go exploring the Hassan Tower, the minaret of the unfinished Mosque and the Mausoleum of Mohamed V: a project of the 12th century that had been abandoned, leaving only the minaret and some 200 columns. Overnight in Rabat.  RiadZyo

Casablanca is Morocco’s modern commercial capital, home to the magnificent Hassan II Mosque. Sitting on an outcrop across the Caribbean, it has a minaret of 690 feet (210 m), the tallest building in Morocco and the world’s highest minaret! The courtyard is planned to fit 80,000 worshippers, with room inside for 25,000. It’s one of the few mosques that non-Muslims can enter in the country which makes it exceptional. Take a morning tour and appreciate the beautifully decorated craftsmanship: hand-carved stone and wood, exquisite detailing of the marble floor and gold cedar ceilings. And then, settle in your hotel when you arrive in Marrakech and have a free evening. Riad El Noujoum

Guided tour of the city of Marrakech will start from your hotel. You will meet your guide and start a day-long tour of the city. The tour will also include Marrakech’s most spectacular sites such as: Medrassa Ben Youssef, the Maghreb’s largest theological college and an outstanding achievement in Moorish architecture, the Bahia Palace, a spacious courtyard haven and blue mosaic walls built for Ahmed Ben Moussa. The palace also contains wonderful quarters for his four wives and 24 concubines, Jemaa El Fna’s wide square, and it’s the main square of the city. Nobody really knows how it came to existence, but over the years it has become Marrakech’s beating heart. After lunch, you’ll refresh yourself with a tour to the popular Majorelle Gardens and a stroll through the souks ‘ most fascinating handicraft quarters like the leather auction, tinsmiths, and coppersmiths. Ultimately, we’ll End the tour at the hotel or square Djemmalefna at 4.30 p.m. 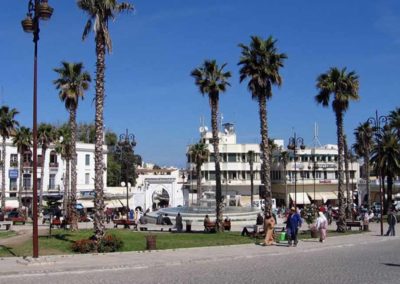 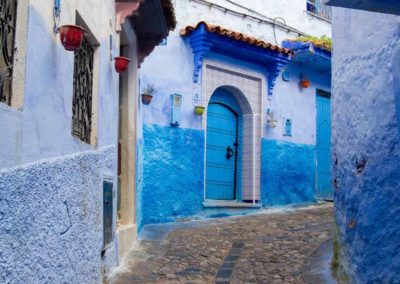 INCLUDED IN THIS TOUR :